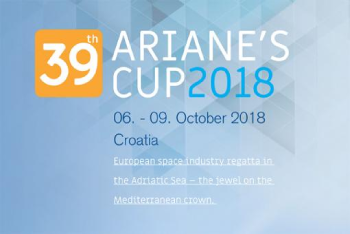 October 6th to 9th, Amphinicy will participate in Ariane's Cup Regatta, the 39th traditional sailing cup of the European Space Industry which will take place at the Croatian coast.

The traditional sailing cup of the European Space Industry will feature about 120 sailing boats and over 900 crew members. First held in 1979, every year members of the industry race against each other in seas across Europe and the world. This year’s Cup will be the first time that the sailing crews will compete in the waters of the Adriatic Sea off the coast of Croatia. It will consist of 5 races, from 6th – 9th October.

The base marina for this year’s Ariane’s Cup will be Marina Baotić in Trogir, where all the crews will gather on 6th October. From there they will spread their sails and reach Pakleni Islands to finally turn back to Trogir.

This will be the perfect opportunity to network and share ideas in an unformal setting with the European space family! :)